We need a replacement

On the night of the 24th we had a huge wind storm here in SLC. I kept waking up due to the rain hitting the window and I thought that was intense. Then I walked outside and saw this... 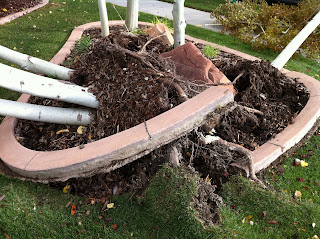 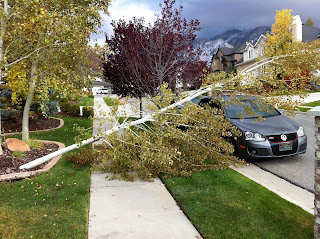 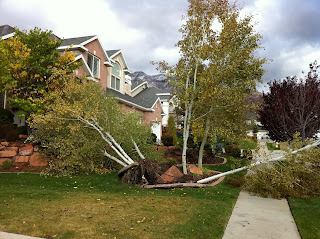 We are very grateful that even though one of the trees fell on top of Philip's car, there were no dents or scratches. It is a blessing because I don't think we could afford to fix Philip's car right now plus the emotional strain for Philip could be permanently damaging. I am terribly sad however for the poor Aspens. They are my favorite type of tree and they were lovely in my parent's front yard. I will let you all know what the replacements will be. I think my mom wants to find another type of tree which will be more durable in a wind storm. I was talking with some ward folk and they told me that a small tornado whipped through our area the night of the storm (according to Fox weather report--not sure the accuracy of anything Fox-related...). What do you think? Also, any good suggestions for a replacement tree?
Posted by Laura Jones at 10:08 PM 2 comments:

My Grandpa Jim passed away last month and I played the piano at his funeral. He always wanted Jazz played at his funeral so I stepped up and volunteered to play. I really felt his presence while I played and it was an honor to be able to play at his funeral. Ever since then I have wanted to play at weddings, events, and small parties. I also wanted to do this to earn some extra money. I posted an add on Craigslist. My first gig was last Tuesday night in Park City. It was at a private home overlooking all of Park City--it was huge! The event was a fundraiser for the Republican Party. Jimmy Shea was there (Olympic gold medalist from SLC 2002 who lives in PC) along with top people running for office. Jimmy Shea auctioned off a day of skiing at Deer Valley with him and three other Olynpians for four. The winner paid $1100 for it.
I was so nervous to play! There were lots of people there and it was so loud and there was a bar so I don't think my mistakes were heard (hopefully). The biggest obstacle was my back--it hurt so bad after playing for an hour and I played for three. I brought 14 songs that I am decent at but it felt extremely redundant playing them over and over again. I wonder if the people there thought that too? At the end my "employer" paid me and said he'd like to hire me again. I gave him my card. Overall, I think for my first gig, it went well. Thank you Grandpa for giving me courage to try something new and exciting!
Posted by Laura Jones at 10:05 AM 10 comments: